The End of an Era. A Goodbye To Heyyyyy Fannnssss

Thursday, August 25th, 2011.  The first day in the history of Heyyyyy Fannnssss.  Wednesday, February 25th, 2015.  The final day in the history of Heyyyyy Fannnssss.  As many of you may know we have switched sight names.  You can now find us at http://www.pensofanarchy.com/ where we will continue to bring you the least serious blog in the history of blogs. If you would have asked me 4 years ago if I thought this blog would be what it has become (which isn't much but still pretty successful) or if I would still be doing this I probably would have told you now.  But here we are 4 years and 6 months later and it's still going strong.  To everyone that has helped/contributed to anything this blog has ever done, especially Andrew, Zack, Nate, Kyle, Steve and even Haylie, I can't thank you enough.  Without you guys this blog would have been an absolute joke. (It still kind of is but you know what I mean).  To everyone that has sent picture, videos, photoshops, whatever, thank you as well.  And to everyone that has read this over the past 4 and a half years, thank you so much.  Somehow thousand of people read the crap we put on here every few days and kept reading it.  If I could thank eveyone that has ever read this blog individually I would.  But I can't, so from the bottom of my heart thank you.  Each and everyone of you.  It has been a blast doing this and interacting with all of  and I look forward to doing so over at Pens Of Anarchy.  Every era must come to an end and even though it is sad that the end of the Heyyyyy Fannnssss era is here, it is really exciting to finally launch into the Pens Of Anarchy era.  And we couldn't have pick a better time to drop the new site.  There is a ton of stuff going on now because we are so close to the trade deadline.  Once again, thank you to everyone that has been apart of this for the past 4 and a half years and head on over to http://www.pensofanarchy.com/ to see some of the stuff we have posted already.  There is plenty more to come. 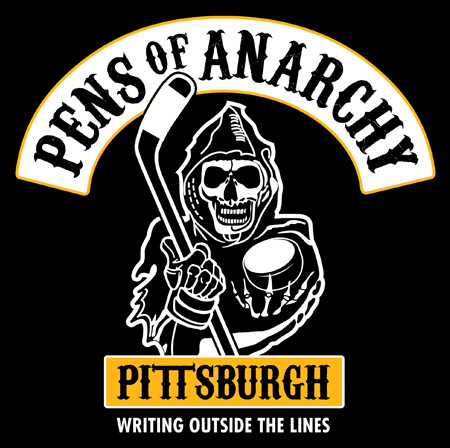 One last time from Heyyyyy Fannnssss

Posted by HEYYYYY FANNNSSSS at 7:13 PM