Apparently these are the new Flyers Winter Classic jerseys.... 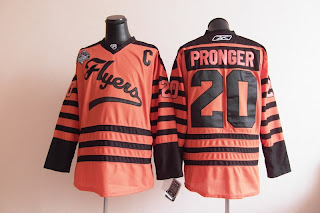 Looks like some bathing suit cover up your grandma probably wore in the late 40s.  Or something some drunk girl would wear on Halloween at a frat party.  Honestly don't know what else to say about it.  Has Pronger even been named the Captain yet?  No idea. 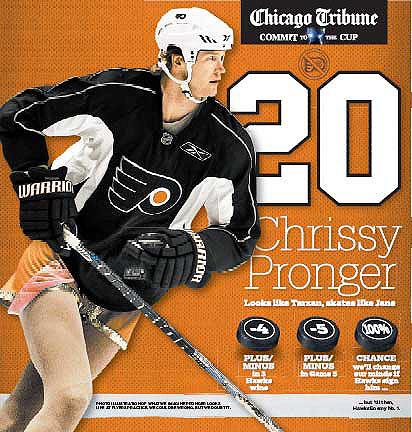 If we had any photoshop skills at all we would photoshop it on here in a heartbeat.
Chris Pronger is a coward.

The other night I was sitting on my computer and someone on twitter posted a picture of a Crosby jersey.  But it wasn't your ordinary Crosby jersey. 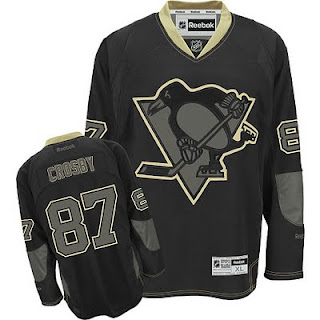 Whoever thought this jersey was a good idea clearly had their head up someones ass.  No clue why anyone would wear this but at the same time I guarantee there will be people at Pens games this season with this jersey on just because its a Crosby jersey.  NHL.com also has Letang and Malkin jersey's with this same color scheme.  Whatever.  The season is 39 days away.  Drop the puck, Go Pens

-Brandon
Posted by HEYYYYY FANNNSSSS at 11:51 PM No comments:

Where are they now? - Jamie Pushor

Today's "Where are they now?" features  X-Generation defenseman Jamie Pushor.  Pushor was acquired on March 15, 2002, in a trade that sent a 4th round pick to the Columbus Blue Jackets.
Pushor finished out the 2001-2002 season with the Penguins, finishing with 2 assists and 30 penalty minutes in 15 games, as well as being a -3.  Pushor played the entire 2002-2003 season with the team (76 games), finishing with 3 goals, 1 assist, and being -28 on the year.
Considering this is the only youtube video that seems to exist of him as a Penguin, he really didn't do much.
Pushor was drafted in 1991 (2nd round, 32nd overall) by the Detroit Red Wings.  He made his NHL debut in 1995 and played with the Wings until 1998, when he was traded to Anaheim at the trade deadline.  He played another year in Anaheim and was claimed by the Atlanta Thrashers in the expansion draft in 1999, but was traded to Dallas days later.  After one year in Dallas, he was claimed by the Blue Jackets in the 2000 expansion draft.
After leaving the Penguins as a free agent, he spent time with Columbus, the New York Rangers, Hartford Wolfpack (NYR AHL team), and the Syracuse Crunch (CBJ AHL team).  Pushor retired during the 2006-2007 season, after leaving the Crunch midyear.
-Steve
Posted by HEYYYYY FANNNSSSS at 1:27 PM No comments:

It's summer.  There's no hockey going on right now and the biggest news out there in regards to the Penguins is whether or not Sidney Crosby will be ready for the season.  Brandon and I had been talking about possibly starting a blog about the Pens for a while now and finally decided to make one.  We really had no clue what to name it, but decided on HEYYYYY FANNNSSSS because we assume Penguins fans will read it and that phrase is yelled, much to the dislike of some, before every so-called Penguins Powerplay.

With training camp coming up in a few weeks, we are going to have previews of the players for the upcoming season as well as some "Where are they now?" posts detailing the post-Penguin careers of players past.  We'll also have game previews and game reactions and attempt to cover (poorly) other action around the NHL.

Lots of changes to the layout and stuff coming the next few days as we figure it out.

If you got any ideas for something you'd like to see email us - heyyyyyfannnssss@gmail.com

Posted by HEYYYYY FANNNSSSS at 10:18 PM No comments: